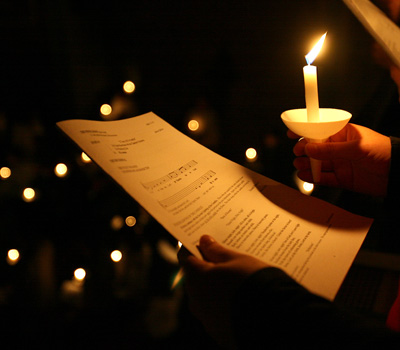 Luke 1:67-69 “His father Zechariah was filled with the Holy SpiritÂ and prophesied:Â ‘Praise be to the Lord, the God of Israel,Â because he has come to his people and redeemed them.Â He has raised up a hornÂ of salvation for usÂ in the house of his servant David…'”

Mary was a humble woman, but Zechariah was a man humbled. Mary’s comprehension of the power of God had so impacted her thinking that when the angel had brought the message that she would be with child, she praised God that instant. Zechariah by contrast, when met with a similar message from the Angel Gabriel about his wife Elizabeth was not steadfast in believing, but doubted that it could be possible. So Zechariah became a mute, unable to utter a word until the birth of his son John the Baptist.

And he learnt his lesson, for the first words from his lips after receiving back his voice are these: “Praise be to the Lord”. Zechariah had been humbled and the result was praise to the Lord! But why praise? Praise because of His plan of redemption. Praise for the provision of the Strong King who God was about to raise up for His people. Zechariah’s son had been born for sure, but it was Jesus who dominated his words when his voice returned.

Perhaps this Advent we would be humbled to speak forth the praises of God for the provision of our Redeemer, Jesus. He is our Strong King and the powers of heaven and earth cannot prevail against his work on Calvary’s Cross.